It’s been an awesome first month for Great Expectations! We shared the framework at Strata, on medium, and on twitter. The reaction was immediate and very positive. 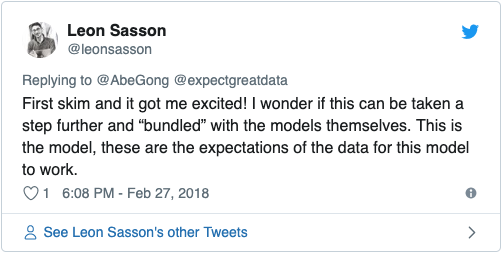 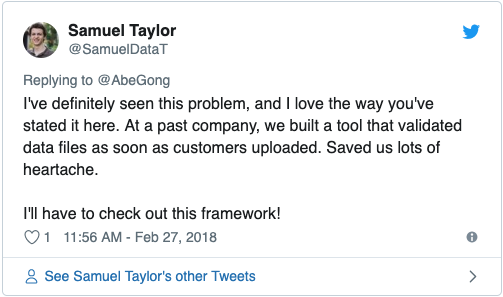 
Thank you! We’re glad you like it, and eager to keep building!

By far the most common request we received was the ability to run expectations natively in SQL. This was always on the roadmap. The community response made it our top priority.

We’ve introduced a new class called SQLAlchemyDataset. It contains all* the same expectations as the original PandasDataset class, but instead of executing them against a DataFrame in local memory, it executes them against a database table using the SQLAlchemy core API.

This gets us several wins, all at once:

Caveat: A moment ago, we said that SQLAlchemyDataset “contains all* the same expectations as the original PandasDataset class.” That’s technically true. However, they’re not all implemented yet. (See the release notes for the full list.)

We hope that some of you will find it in your hearts to help finish these NotYetImplemented expectations. (Because of the magic of decorators like @column_map_expectation, implementing a new expectation is often just a couple lines of code.) If not, the core team will continue to chip away at them.

In GreatExpectations v0.3.*, there were several subtle but pervasive inconsistencies in the result_objs that are returned from expectations. The biggest complaints that we heard from power users of Great Expectations revolved around these inconsistencies. (You can find details in Issue 175 and the release notes)

That said, we know that introducing a change of this kind will cause headaches of its own: it will break downstream code that consumes expectation results. To fix them, you shouldn’t need to do anything more complicated than unpack json objects differently. And you can always pin to version v0.3.2 as a temporary fix.

We promise we won’t do this too often. Please get in touch via Issue #247 if this migration gives you any trouble.

Thanks, @dlwhite5 for diving deep into the pandas internals so that operations on a PandasDataset now returns another PandasDataset (instead of a regular pandas.DataFrame)

Thanks to @ccnobbli for implementing expect_column_parameterized_distribution_ks_test_p_value_to_be_greater_than! This expectation allows you to compare a column against parameterized continuous distributions implemented in scipy (e.g. normal, Poisson, beta, etc.)

Thanks @schrockn for suggesting and implementing ge.from_pandas(), to make pandas-to-great_expectations conversion more discoverable and user-friendly. We also implemented a top-level validate option ge.validate() for the same reason.

Thanks @louispotok, for adding a column_index parameter to expect_column_to_exist, so that users can test column orderings.

Thanks to @rjurney for suggesting a ge.read_json() helper function to read files that contain json lines.

We made also made some deep, behind-the-scenes improvements to the Great Expectations testing framework to ensure parity across data contexts. This is a big enough deal that it will probably get its own blog post soon.

Thanks again to everyone who contributed feedback and code to this release. Please keep it coming!

We’re excited to make Great Expectations more useful. Together, we will obliterate pipeline debt, once and for all.

Sign up for emails and get more blogs and news

Search our blog for the latest on data management